Everything is done from your Projects Page

All of the CampaignBuilder functionality is presented through an intuitive one-page interface which we refer to as your Projects Page. (Of course, you must be logged in to see your Projects Page). From here, you have access to all of your project lists, as well as the project lists that have been shared with you.

A project is one campaign and adgroup combination. Project lists are sets of projects owned by one user (and potentially shared with other users). Each project list is shown in the pull-down menu in the upper left of the screen (Examples is the default list selected when you first sign up). You can see the owner of any project list displayed below the name. 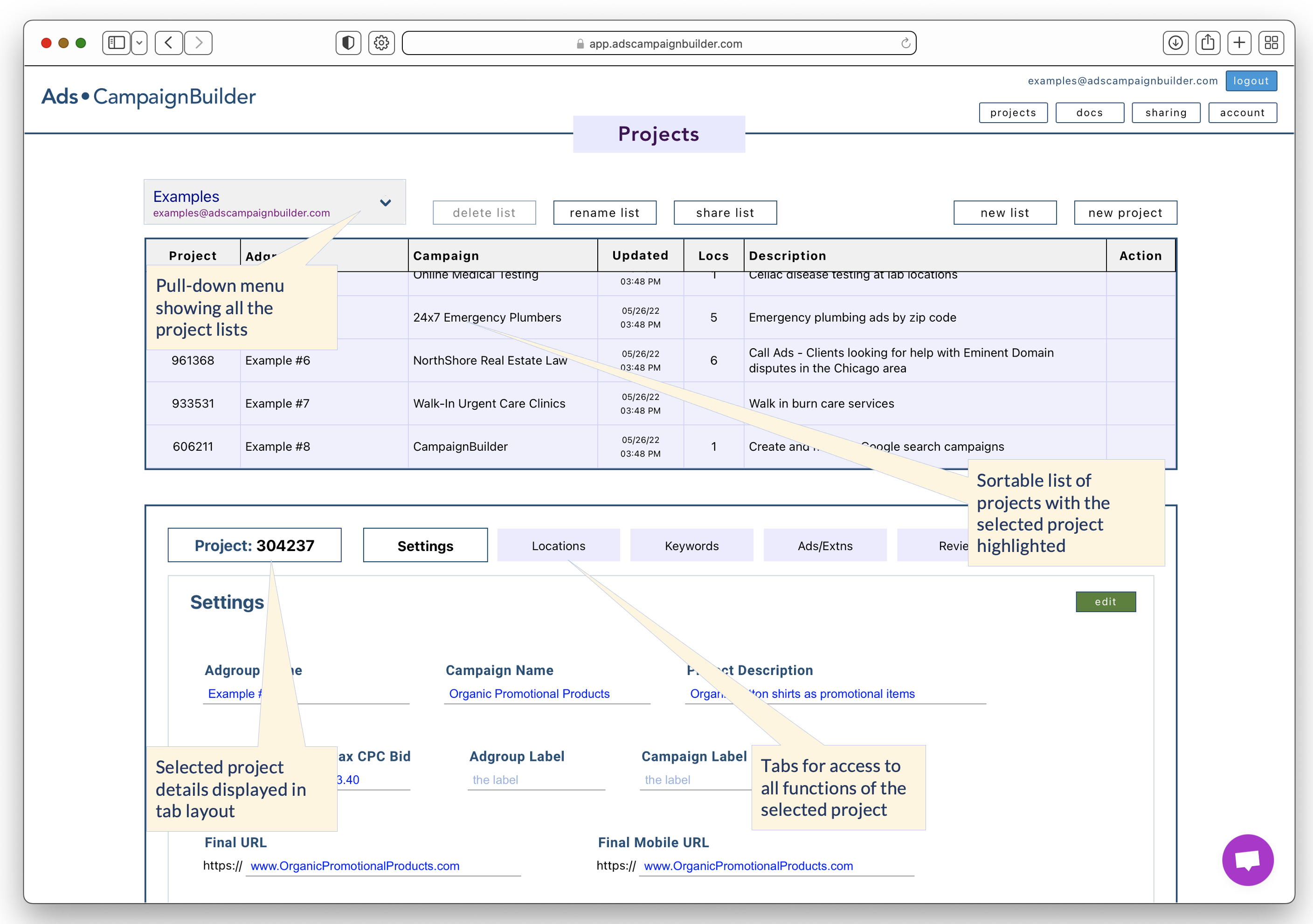 All the CampaignBuilder functionality is on the projects page

Projects are how CampaignBuilder stores campaigns

CampaignBuilder uses the concept of a project to store and manage your campaign information. That's because you can do things with projects (within CampaignBuilder) that you can't do with campaigns or adgroups by themselves. Let's go over a few of these features of projects so you have a good idea of how they work.

How projects help you to stay organized

Campaigns and adgroups within Ads/Editor are identified by their campaign name and their adgroup name respectively. Those names might be around in your production account for a very long time - even though they go through a lot of changes. At any point in time, it can be quite challenging to identify which version of a particular campaign is in production and running. When you make changes to your campaign, it can be quite difficult to know that the changes have been applied.

Projects give you the tools to do version control effectively.

Projects help you to stay organized with two features: a unique six digit project number that is system assigned when you create a project, and a set of fields you can use to describe a particular campaign version. You can use these to precisely identify which version (project) is currently loaded into your production account.

Create a new project or copy/modify an existing one

Two ways of creating a project: New or Copy

Use multiple projects to support multiple adgroups within a campaign

You can use multiple projects to handle one campaign that has multiple adgroups. Each project will handle a different adgroup, but they will all belong to the same campaign when they are loaded into Editor. This gives you the abilty to update and manage each adgroup separately with the visibility to ensure their consistency.

Multiple projects can belong to the same campaign

Did this page help you?
Yes
No
UP NEXT
The Settings Tab
Docs powered by archbee